*Disclaimer* This is my personal understanding and relationship with the term Two-Spirit as an Anishinaabe Kwe. This is not to negate anyones choice to use the term to reclaim identity NOR should it be used to invalidate, erase or shame Indigenous peoples use of the word.

I’m Queer and Indigenous. I write that and can already hear the whispers of “two spirit” from the non-Indigenous folks who have learned the word in their latest women and gender studies class. The ou’s and ah’s as white gays get ready to use my existence as justification for theirs. “See, WE’VE always been here on these lands!” Sorry white man who will surely get screams of “yaassss queen” from their fellow white gays, No, YOU haven’t always been here. And while we’re at it, your use of the resilience of Indigenous Queer communities through colonization is at the bare minimum insulting, and at its height, is the erasure of the continued genocide and colonization of these lands that you contribute to. Now that might seem harsh, but too often are Indigenous bodies, and more specifically with the rise of decolonizing everything, Queer Indigenous bodies have been used as talking points to get rights for literally everyone else but us. Adding 2S to the end or beginning of LGBTQ+ doesn’t erase your complacency in our oppression. But nonetheless here you are putting a label on me, that to be absolutely honest is not a label I personally want as an Anishinaabe Kwe, and I’m going to explain why. 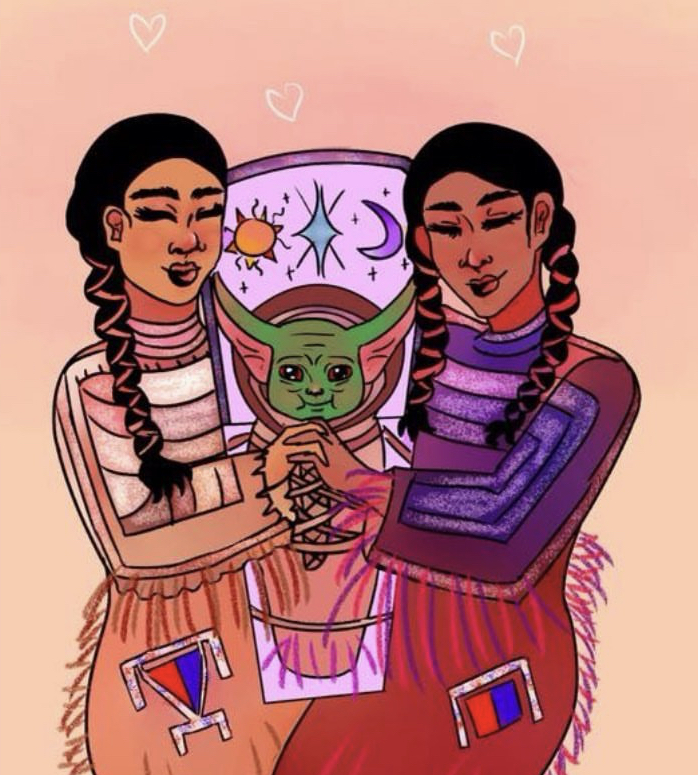 The first time I heard the term “two spirit” was not while sitting cross-legged on the floor of a tipi in front of a fire as I’m sure many folks envisioned my welcoming into Indigenous Queerness looking like. I mean for one, Anishinaabeg didn’t and don’t use tipi’s (no matter how many of them pop up on our territories) and secondly sexuality and gender didn’t have the same significance in our communities as it does now. I actually heard it for the first time from a Jewish man sitting at a booth during Toronto pride when I was 21. I was walking around with a rainbow flag that had a pair of feathers in the centre, and he asked me if I was Native. When I replied yes he went “omg so you’re two spirit!” With it being more of a statement and less of a question and me not wanting to be embarrassed for not knowing a term from my own community I nodded, smiled and said “yes!” I really didn’t think of the term again until I was in university and started hearing it being used by non-Indigenous folks in my classes as they discussed Queer history, pre-colonization. I heard folks explain that the term referred to someone who held two spirits within them, both the masculine and the feminine. This of course confused me because from the teachings I had received from Elders, every single one of us carries both of these energies within. We can’t function without it, we need a balance of both. Or how it was once explained to me, was that we all are like the big drum, without the stand the drum will fall, without the drum the stand will fall. Thus making all of us “two spirit.” Then in another space I heard that it solely referred to Trans Indigenous folks. Since I didn’t and don’t identify as Trans, it really didn’t make sense for me to utilize the term. Later that year I had brought a Trans woman to a moon ceremony after she had asked if she could attend, she referred to herself as “two spirit” and so I asked my Elder what her role was in ceremony. It soon became clear that what the Elder understood as “two spirit” and what we understood as “two spirit” were two VERY different things. For the Trans woman I had brought to the ceremony, she wasn’t looking for a sacred role in the space, she just wanted to know if she could participate like any other woman would.

And this is where applying terms in a pan-Indigenous way can cause harm and confusion for those of us navigating the world as Queer Indigenous peoples. The term “two spirit” isn’t a traditional one. I’m sure you’ve seen it written in the Anishinaabemowin language, “Niizh Manidoo” which is the literal translation. But the term was created during the 3rd annual Gay and Lesbian Powwow that took place in Winnipeg, Manitoba in 1990. Historically Queer Indigenous peoples were referred to as “berdaches” a term used by the Jesuits which loosely translates to “prostitute.” I get why the term needed to be created, there are various reasons as to why. I think for most of us searching for something to identify with, a term the encompasses all of who we are, terms like Queer, Lesbian and Gay don’t necessarily fit. They often times feel colonial and imposed on us. On top of that, a lot of us don’t know or have access to our languages to use the terms that were traditionally used for Queer folks in our communities. Colonization cut those ties, and if we’re being honest, erased a lot of the terms and teachings we had around those identities. I struggled and continue to struggle with this myself. It’s a double edged sword. The popularization of the word in academia and “woke” political circles has lead to false narratives around the role of Queer folks in Indigenous communities on a larger scale. White academics who don’t understand the numerous, distinct and complex differences between nations, cultures and languages, have painted communities with one Queer friendly brush. Not every community had a term for what we see now as “two-spirit” people, not all of them had sacred roles within communities and not all of them were healers or medicine people.

On a positive note, the term “two-spirit” has also made room for us to have these conversations in the first place. Its creating space and dialogue in academic settings and is allowing young Indigenous Queer youth a place to start when they don’t necessarily know where to go or begin. To me the term is powerful for those who identify with it, you can ask every single Queer and 2S person what the term means to them and we will all give you a different definition. The term was created by and for Indigenous Queer folks living on what as Anishinaabeg, we see as Turtle Island. And not one definition is more right than the other. I support those who wish to use the term and define it in which ever way make sense to them in their Indigenous world view.

When I realized 2S wasn’t the term for me and that Queer still felt like too tight of a box to squeeze me in, I turned to my friend and knowledge keeper Caleb Musgrave. Caleb is someone i’ve turned to many times for teachings and understandings of the language and I was hoping he would be able to help me locate the term that we as Anishnaabeg would have traditionally used for Queer people within community. He had no such term, Caleb explained to me that sexuality wasn’t of importance to us as Anishinaabeg, not like it is now or in colonial eurocentric societies. We had many discussions about how language wasn’t gendered, and he explained to me that terms that seemed binary like “kwe” or “nini” actually had to do more with one’s roles and characteristics then it did with what was between their legs. So it made sense that if gender didn’t matter then why would who I sleep with be of any importance to anyone. I also spoke with Anishinaabe Elder and language speaker, Mawla Shawana, looking for a term that may fit. The closest thing he could give me was “kwewan bashiigwaan” which essentially translates to “woman who bothers with other women,” I mean technically accurate but not exactly what I was going for. Needless to say there just wasn’t a word in the Anishinaabemowin language that could describe my sexual preference. And I realized the more I looked into the languages of other nations, neither really did they. Most of what I could find, were terms for Gender fluid and Trans folks, and that specifically, once again, is more about their roles within community then them actually being someone who has transitioned. Hence the confusion during the full moon ceremony I spoke of earlier.

I recently attended an event where I was invited to speak about language and gender and the way the colonial imposition of gender on my language has changed the way we understand ourselves. As I was waiting to go up and do my presentation I was introduced as “two-spirit,” and if im being honest, instantly felt my stomach sink. Not due to any internalized homophobia or disdain for the word, but for the simple fact that it feels wrong, that it feels like im being given a title and a role that I do not hold or deserve. In a video interview conducted by Centennial College, Oji-Cree and Two-Spirit Elder Ma-Nee Chacaby talks about the roles of 2S people in the Anishinaabeg community. To be 2S meant that you were not only a medicine person, but also a foster parent to any child who had lost their parents, you took care of and watched sacred fires, you decided which roles others in the community would take on, the list goes on and is endless. To me as an Anishnaabe Kwe, to be 2S is more of an honourable role within community than just a simple title referring to gender or sexual identity. It also doesn’t necessarily refer to Trans folks who wish to live as either a Kwe or Nini and take on those individual roles. There were terms, “ikwekanaazo, meaning ‘one who endeavors to be like a woman. Women who functioned as men were called ininiikaazo, meaning, one who endeavors to be like a man.” and even that has been translated through colonial understanding of language. But we had them, and they mattered because they were often roles gifted through dreams by creator.

However, these terms don’t describe me. At least not right now, during this part of my life. I’m just a young Indigenous Queer woman. And I hope one day I can truly “decolonize” my identity and drop the Queer part because for my community and my people, that never mattered. One day I can just be Shanese Indoowaaboo Steele, To Carry The Ceremony. But for now I’ll settle for the word the feels closest to right. Which is Queer, it allows me to identify with a community I hold dear to my heart without limiting my sexuality in the way other terms might. And while Queer still feels a little off, I can keep searching for a term that fits, I just know “two-spirit” isn’t it. This doesn’t mean that we should get rid of the term, it doesn’t mean that its good or bad, and it doesn’t mean that how I feel about it is right or wrong. Like any term we create to define ourselves, it’s all about how you personally feel about it. What does “two-spirit” mean to you as an Indigenous person? So, for young, old and in between Indigenous folks navigating a colonial world that works to erase all that you are, whether you identify as Queer, Two-Spirit or just yourself, you are valid in all that you are.

So the next time you meet another Indigenous Queer person, ask them first if it’s a term that feels right to them before mislabelling them in an attempt to be an ally. Remember that their personal definition of what “two-spirit” means is what matters. And for Creators sake, stop using us as your stamp of gay approval to combat the bigotry that your community brought here.